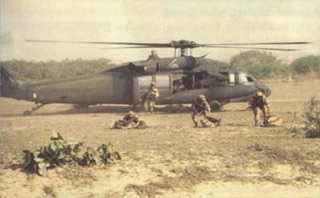 The next morning at around 0800 hours (8 AM), A CO was targeted with several grenade attacks. In one such attack, Dirty D, one of the mortarmen and a fellow disciple of Jesus of Barawa, had been in one of the OP’s (Observation Posts), when a Somali tried to throw a grenade into the OP, through a window. The grenade was deflected by the camouflage netting the OP was covered with, which saved the lives of roughly 8 soldiers. Though they got their bells rung by the subsequent blast, no one was hurt nor were they able to stop the perpetrators of the attack as they disappeared into crowds of Somalis, making it impossible to return fire. Even the Somalis who weren’t part of either militia were being aggressive towards the American and Belgian forces by rioting in the streets and throwing rocks.

In the worst of the day’s attacks, a couple dozen Somalis were the only casualties as the militiamen continued to hurl grenades. Though our medics and soldiers did their best to help treat the wounded, there were simply too many and most were taken away in carts to a nearby hospital. At around 0845 two more grenade attacks took place against A CO . One of the attackers had his arm blown off as his grenade detonated in his hand. Though the log states that soldiers attempted to stop the bleeding I can assure you those “efforts” mostly consisted of words of encouragement.

After the Belgians then reported spotting a vehicle from which grenades were being lobbed from as it drove through the city, E CO pursued and captured the vehicle and its occupants at around 0854 hours. At 1037 hours, TM Hawk and the BN TAC engaged in a firefight with several gunmen, capturing five in total.

After several more incidents throughout the day, at around 2050 hours, the Scout’s Mr. Rogers and Sneaky initiated a firefight with several armed militiamen which resulted in one killed and two critically wounded, with the rest breaking contact. Doc W treated one of the two wounded men for a penetrating chest wound by giving him a chest tube.

After being ambushed, the B CO mortar section sergeant, who was only armed with a 9mm pistol, killed the Somali nearest him and took his weapon, before continuing the fight. He then personally killed 3  more fighters, and the rest of his men killed 5. The rest fled the scene. None of the Americans were wounded in the fighting. When the four made it back to safety, Dirty D stood in confounded amazement as a 2nd LT in their chain of command threatened to court martial them for breaking the Geneva convention for having used the enemy’s own weapon to kill them. Yes, that’s actually against the “rules”.

However, the government says we’re technically not at war, so how can the rules of war possibly apply? Coincidentally, it’s also the reason this sergeant didn’t receive the Bronze Star for Valor he clearly deserves.

Excerpt from “Blood Trails” in “Behind the Gun”