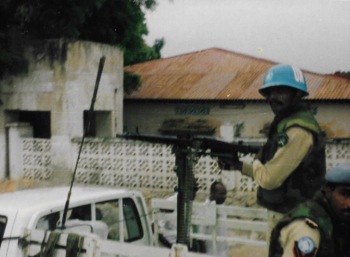 After a few days of patrols around Wanlaweyn (Wally-world) and Baledogle, it was time to go into Mogadishu, something we would do quite regularly as convoy escorts for VIP’s like Robert Oakley, the former US Ambassador to Somalia.

As we started out in our Humvees and got outside the wire, we began driving east toward Mogadishu. Before too long, we started seeing new sights as we got into territory we’d not seen until this point. Just a few miles outside of Mogadishu, we stopped as an OH-58 Kiowa (scout helicopter) sped over the top of us, followed no more than two minutes later by 3 Cobra attack helicopters. They were flying pretty low and fast as though they were after something. Sixty to ninety seconds later, the ground suddenly and violently shook as we heard a large explosion.

“What the fuck was that?” someone asked.

“I think those Cobras just took something out!” SGT Bubba Douglass replied.

After a few exchanges on the radio, it was confirmed that the Cobras had flown just ahead of us and taken out a couple of technical vehicles, one with a .50 caliber machinegun mounted on top. The black smoke now visible, we prepared ourselves for any possible counter attack from survivors. However, there were none.

The destroyed masses were barely recognizable as they lay smoldering in the bush just off the main road. No one even had any idea how many people had just been sent to meet Allah.

Though we were several hundred meters away when the Cobra unleashed one of its Hellfire missiles and a few 2 inch rockets on the unsuspecting militants, the ground shook where we were as though we were in an earthquake (closet thing I can relate). Had the Cobras not taken out those vehicles, we probably would have had a really, really bad day. My M-60 was the biggest weapon we had, and though we had two of them, taking on any size force with a .50 caliber would have been challenging, depending on who fired first.

We then had a pleasant surprise; rain. Approximately 30 seconds of it, the only time it rained our entire time in Somalia. I took of my Kevlar helmet and opened my shirt in an attempt to catch as much of this refreshing surprise as possible. Then it stopped as abruptly as it started. No more than 30 seconds. FML.

As we entered Mogadishu, I was initially surprised at how many people there were. My adrenaline still pumping, I was on full alert as a vehicle drove by that wasn’t much different than what the Cobras had just taken out a half hour before. Except manning the machinegun was a Pakistani soldier in a bright blue helmet, which seemed to make him an excellent sniper target. Maybe it was a clue as to why so many of them were being killed, one reason President Bush had used as a catalyst for sending us here. I was glad that we were NOT under UN control, and never would be. We had our own rules of engagement and a command structure that didn’t include anyone in the UN.

Excerpt from “Hellfire Christmas” in “Behind the Gun”

Note: If you click the link at the start of the article for Baledogle, or here, you’ll see America still has a presence here.

One thought on “Hellfire Christmas – An Excerpt”