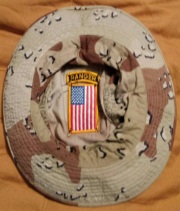 Having served in the 25th Infantry (light) before coming to our unit, Brahma was a hardcore Ranger and the first squad leader many of us in my cohort had. I believe whoever wrote the Ranger Handbook probably copied him (as well as SGM Poe). If I could have changed anything about my first year in the Army, it wouldn’t have been having him as my squad leader. Though our lives initially consisted of weekend room inspections and the most grueling PT (Physical Training) you can imagine, I wouldn’t have had it any other way.

Every member of the squad was required to have a Ranger Handbook, which I carried in a zip-lock freezer bag. Among our routine training with Brahma was knot tying. Sounds like a simple thing, but he didn’t just teach us a couple of knots and leave it at that. More important than the volume of knots was how to use said knots. Bowline, Prussic, Square knots; you name it. He not only taught us the knots, but how to use them, such as making prussic handcuffs out of 5-50 cord, tying rappel seats and anchor points for rappelling.

We not only did live fire exercises, we did them realistically, something they don’t do much these days. Too dangerous they say (as they send under-trained people off to war). We did hours upon hours of patrolling, infiltration (another lost art in today’s Army) and ambushes, taking everything straight from the Ranger Handbook.

It was in this squad during company squad competitions that we finished a 12 mile road march with full gear in 1 hour and 53 minutes; more than a full hour faster than Ranger standard, and more than two hours faster than Army standard. Spaceboy even had to be carried the last half mile or more. We didn’t leave him; it wasn’t part of the creed we were “raised” under.

He taught us to observe our environment, even going so far as to teach us to look for trip wires and booby-traps, as well as employ them (something I mastered later). After awhile, I could even spot ambushes during training missions so well, we’d surprise the opposition by flanking them while they watched the “bait” we left moving slowly ahead for them to watch.

Prior to our going to Somalia, he attended and passed the Special Forces Selection Course and was awaiting orders to attend the Q Course. Something that no one was surprised to learn. However, Somalia put this on hold for awhile. Something I can say I know all of us were grateful for.

In Somalia, he was a major key to our success on every mission, known for being the most aggressive and tactically proficient among us. He never acted in haste, meaning, not without thinking, though his reactions were always swift. And correct.

After Somalia, while waiting to leave to Fort Bragg to attend the Special Forces Q course, he spent his last few weeks doing PT by himself, eventually allowing me to join him so I could prepare for Light Fighter School with the ultimate goal of Ranger School.

In 2010, some 17 years after we last saw him, he represented the rest of our cohort squad by showing up in full dress uniform at the funeral of Steven J. Mangold, who had died in a motorcycle accident in North Carolina. That kind of loyalty is rare these days and holds true to the Ranger Creed.

I could not have asked for or been given a finer hierarchy of leadership than what I had in A CO.

Earl says Brahma even taught him how to iron. Something I am sure comes in handy in the cornfields of Iowa.

Brahma retired recently after nearly 30 years of service, most of which was in Special Forces, and deployments all over the earth.

3 thoughts on “Brahma – Profile of a Ranger”