Born in Barbados, “Wheels” was a member of my squad in Somalia with J’Dub as our Squad leader. After returning, we came up together as NCO’s. The previous nickname he had was “Booger”, but that was before he met Steve Mangold, and it’s not exactly a nickname that describes the general level of “bad-ass-ness” that adequately defines a man like Wheels. Having joined the Army with the same cohort as Chico, Wheels was another one of the “Specialist Mafia” that kept us younger guys squared away. I consider him a lifelong friend and a brother. He’s dependable, funny and….well, bad ass.

Wheels was standing right next to me along with Cabbie when snipers initiated our “Baptism” in a Mogadishu suburb as their initial rounds ripped into the tree directly behind us. Truly a Pulp Fiction – Hand-of-God type scene as we were amazed we weren’t hit as we later had time to analyze the situation.

During our numerous patrols, air assaults, ambushes, infiltrations and cordon and searches, Wheels was never more than a few meters away from me at any given time except when he was in full sprint, hence his nickname. In “The Last Patrol” chapter of “Behind the Gun”, I tried in vain to keep up with him as we sprinted after several assailants who had been in the process of robbing and beating an old couple as we rounded the corner and came upon them. Luckily, he came back for me as a the one or two individuals I was pursuing quickly turned into an angry mob.

The afternoon following a firefight with Ali Tihad (Al Shabaab) at 0200 hrs, Wheels was one of the point men during our subsequent raid as he chased down and subdued one of our attackers when his weapon jammed; an action that sparked the rest of us to kick in the doors and take 36 prisoners. In the compound we then recovered hundreds of weapons, some of which were shocking. We also recovered communications equipment, including a PRC-77 on our frequency. The raid, what we found and how this incident was handled is shocking.

Wheels recalls getting a break from the chaos of life in Somalia by sitting on the beach, watching the Indian Ocean, and listening to some easy listening heavy metal and grunge music, thanks to the Grinch and his Walk-man. After being by my side every time we took fire or engaged the enemy while in Somalia, Wheels is the first person on my list of “Hell, yeah…..I’m going to war with THAT guy”.

After Somalia, Wheels, along with many of us who served in Somalia, made history again by conducting the Army’s largest air operation from the deck of a naval vessel as we air assaulted from the U.S.S Eisenhower to kick off Operation Uphold Democracy. Though jokingly referred to as the “Haitian Vacation” (mostly by us who served in Somalia), it was anything but a cake walk, especially the first two months.

Under the command of General Petraeus, Wheels was the tip of the spear during the invasion of Iraq in 2003 as a PSG (platoon sergeant) with C Company, 1st Battalion, 502nd Infantry Regiment, 101st Airborne Division. They took a few casualties when they were caught in a circular ambush, something considered insane by most standards of warfare, and something not seen since the Germans used the tactic in WWII. Wheels was part of a National Geographic documentary on the Iraq war in “The Fight for Karbala” (which I can no longer find online for some reason). He was awarded two BSM’s (Bronze Star Medals).

Wheels has taken part in numerous post 9-11 combat deployments to both Iraq and Afghanistan and is by simple definition, a hero. And he has been one since I first served at his side in Somalia.  A guy who after 20+ years said “I love you, man” within the first few minutes of hearing my voice again, I simply do not know a finer human being or a more fierce warrior (or a faster one for the record). Since we had both played football prior to the Army, it took all of 2 seconds for us to become friends. 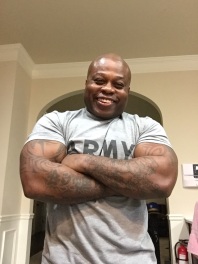 Today, Wheels is a 1st Sergeant in a Basic Training company in Fort Jackson, South Carolina and earned his US citizenship the old fashioned way; he fought for it. Literally. Though he will undoubtedly be chosen to be a SGM, he thinks he will quietly slip into retirement as a civilian. When we talk, he reminisces about how the Army was when we were coming up, referring to the newer generation mostly as a generation that doesn’t do any of the stuff we did as standard light infantry. “They can spot an IED a mile away, but have no idea what to do in an ambush or how to do an infiltration.”

As he contemplates his future and possible retirement, Wheels is busy being a fulltime dad and husband. His list of heroic and meritorious accolades far exceeds almost anyone I know, and soon the world will also know him as one of the first 16 Americans to ever face Al Shabaab (Al Qaeda in Somalia).

I hope you will read about Wheels and other amazing soldiers I served with in “Behind the Gun”.