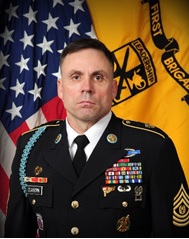 With a last name like Clayborn, his nickname was chosen long before he ever even dreamed of becoming a soldier. It was even decided long before he was ever born. CSM Kenneth Lee Clayborn  got his start in the Army like the rest of us in A CO 1-87 IN and like many of us, credits the strong leadership we had under men like CPT Parks, 1SG Bill Poe and 1LT Tom Ditomasso for giving him a great start in a long and prestigious military career. Almost every soldier I’ve interviewed for this book points to 1-87 IN in the late 80’s to mid 90’s as one of the finest infantry units ever. And guys like Claymore made that a reality. I’m amazed when I reflect both on the leaders we had at the time as well as what my peers have accomplished over the years since.

In Somalia, SPC “Claymore” was an RTO for our company scout/at/mortar section where I learned to appreciate his wit and his humor as well as his tactical knowledge. He was also very good at knowing when each of those traits was appropriate to show. He was a dedicated soldier and a great role model to be around as a young E-4, though I probably could have taken more from his example on when to not be a wise ass. SFC Jones of 2nd platoon and Claymore enjoyed a bond that still probably echoes through the halls of the A CO barracks to this day; “Claymore! Drop and give me 50, son!”.

While many people may know about his more current history in the Army, I’d bet the reason he has a star in his Combat Infantryman’s Badge is a mystery to some. CSM Clayborn was a member of one of the first, as well as one of the last Army battalions to have boots on the ground in Somalia; from the start of the operation (A CO), through the Battle of Mogadishu (C CO) and it’s aftermath (B CO). The legacy of the 87th regiment in Somalia starts with the first awards of the coveted Combat Infantryman’s Badge for the 10th Mountain Division since WWII in Afgoye, a suburb of Mogadishu. We were also among the first Americans to go to places like Mogadishu and it’s infamous Barkaar Market. We performed countless Air Assault missions and probably covered more ground than any other conventional Army unit in country, even more than most Special Ops Forces; from Beledweyne to Kismayo. In Kismayo, we engaged rival clans and stopped clan fighting and broke up subsequent bloody riots after Gen Morgan and Col Jess’ forces clashed in and around the city, an engagement that started the same day as the first bombing of the World Trade Center in NY.

In Marka we faced the predecessor of Al-Shabaab and the Islamic Courts, a group called al-Itihaad al-Islamiya, who were known allies of Al Qaeda. While in Somalia we were given security briefings on Israeli Intelligence that warned of terrorist groups operating in our area. The problem for us is that we had never heard of Al Qaeda, so the name meant nothing at the time, though we were all relatively sure who the warning was about. By the time we left Somalia, we had several engagements and skirmishes with the group that would come to eventually rule Somalia after the UN left. Though our deployment was tough, we also took every opportunity to have some fun when we could, and guys like Clayborn made that easy.

After Somalia, CSM Clayborn and I were selected for the E-5 promotion board, which we attended together. And for the record, I beat the CSM on points that day by scoring a perfect 200 to his 195, something I told him I wouldn’t mention. I don’t think he reads much of what I write, so I figured I’d go ahead and slip that in there.

After a fairly brief break following our deployment to Somalia and breaking in some new cohorts, CSM Clayborn went to the 25th ID while 1-87 again made history when we Air Assaulted off the deck of the U.S.S Eisenhower at the start of Operation Uphold Democracy with the rest of 1-87 IN. This was the Army’s largest air operation from a navel vessel since the Doolittle Raids of WWII. CSM Clayborn and the 25th ID relieved us in Haiti in January of 1995. This would be the last I saw or heard from him for the next 20 years.

Both the CSM and his wife are also avid body builders who compete regularly in all natural body building competitions. They both recently won several trophies at a competition in KY.

I hope you come read “Behind the Gun” and learn more about “Claymore” and scores of other amazing soldiers who served in Somalia in a book that will tell much of the story that was never told about America’s involvement in Somalia, where the War on Terror was in it’s infancy.

All photos are the copyright of Kenny Clayborn and Steve Slane.